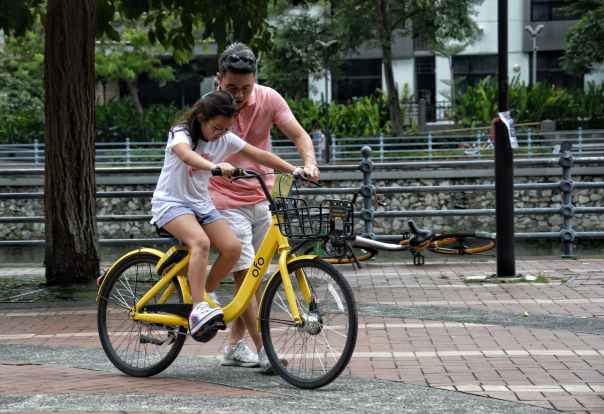 Photo by Lgh_9 on Pexels.com

You would probably be hard-pressed to find anyone who hasn’t heard the expression “It’s like riding a bike – once you learn how you never forget.” This expression is often used to refer to going back to something difficult after years of not doing it, implying that it shouldn’t be difficult to pick up where you left off.

As anyone who has actually ridden a bike after not riding one for 20 years can attest, it’s not quite as simple as it sounds. There is definitely a bit of uncertainty at first, and it’s unlikely you’re going to go flying around like you did as a kid right away.

What people often forget, however, is how difficult learning to ride a bike actually is. Those of us who can ride one take it for granted. But it wasn’t always so simple.

At first, our parents (or some other adult) probably raised the training wheels some so we could get a sense of what it was like without the actual danger of falling off.

Eventually, though, the training wheels came off, and an adult held onto the back of the seat, running along behind us as we got the hang of balancing ourselves while churning our legs to make it go. Most of those adults also probably let go without telling us, despite our admonitions not to, to prove to us that we now had all the skills required to ride successfully. And oh, how we rode!

I bring these sometimes painful yet exhilarating memories up because learning fastpitch softball skills is no different.

At first, players are a bit tentative. Whether they’re pitching, hitting, throwing, fielding, etc. they’re not quite sure how to move and manage all the various pieces, and they do the fastpitch equivalent of falling off a lot.

As they learn, they have to focus on what they’re doing, and most have to think through the various pieces as their brains learn to process the skill. But then at some point it all clicks, and they’re able to do whatever it is they’re trying to do, which enables them to advance as a player.

Just as with riding a bike, it happens at different points for different players. The seemingly lucky ones get it right away. I say “seemingly” because sometimes when things come too easily it can hold players back from developing their skills at a deeper level. Especially when coaches, parents, teammates, etc. are more focused on winning today than helping players become the best they can be. There is value in the struggle.

For most, the skills will come more slowly, with plenty of bumps, bruises and scrapes acting as battle scars as they learn. But eventually they will come.

The goal, of course, is to make fastpitch skills like riding a bike – something players can execute without thinking.

Assuming you can already ride a bike, consider how you do it. The odds are very high that you just hop and do it. Your body knows how to move, how to balance, and what to do when. It feels instinctual, even though it is actually a learned skill.

That’s where you want players to get to on the softball field. They don’t need to “remember” to raise their elbow to shoulder height when throwing. They just do it.

That’s the goal. But it’s important to remember that it takes time. Again, some kids learn to ride their bikes on their own right away, while others can take weeks – especially if they’re afraid of falling off. But they all will learn.

And it takes good repetitions. The more players (and coaches/parents) concentrate on doing it right from the start, i.e., focusing on the process rather than the outcomes, the easier it becomes to do it right under game pressure.

Finally, it takes patience to understand about it taking time and good repetitions. It’s easy to get caught up in wanting everything to be perfect right away, like the players you see on TV.

But I can guarantee you the players you see on TV didn’t look like that when they were younger. In fact, they may have looked more awkward than the player(s) you’re working with right now, as this video of a certain well-known left-handed pitcher shows.

But they persisted and found their “bicycle moment” when it all clicked and they were just able to ride.

You wouldn’t expect any child to simply hop onto a bike and start pedaling away – much less do the complex BMX tricks you see on TV. There’s a progression, and it all starts with those first shaky feet.

It’s the same with fastpitch softball skills. They may need a lot of help at first. But eventually, with persistence, they will find their way, and those skills will be a part of their game forever.

Even the best fastpitch players weren’t always the best players

As I write this, it’s the best time of the year for fastpitch softball fanatics. The NCAA Division I tournament is underway, and the airwaves (or cable waves) are filled with a seemingly endless diet of games.

You can hardly swing a dead cat without coming across a game somewhere over the next few weekends. That’s good news for the families of younger softball players, because it gives them a chance to see how many of the top players play the game.

Yet as you watch, it’s tempting to think that all those high performers were just naturally gifted, and always played the way they play now (more or less). The fact is in many cases it isn’t true.

If you talked to them you’d find out that many of these players started out as benchwarmers who were just happy to get a few innings in here or there. Or that the awesome pitcher you’re watching lead her team to victory in Regionals, Super Regionals, or even the Women’s College World Series wasn’t always the #1 player on her travel or even high school team.

Many top players, in fact, had to work their way into the positions they are in today. That’s nothing new, either. It’s always been that way.

For evidence, I’m going to point you to a couple of good stories of personal struggle. The first two come from Amanda Scarborough.

I’m sure many of you recognize that name. She was an All American pitcher at Texas A&M, runs pitching clinics all over the U.S. as part of The Packaged Deal, and is now a commentator on ESPN. Pretty good resume, I’d say.

Yet Amanda will tell you she wasn’t always on the fast track to stardom. In fact, in this blog post she talks about how on her first travel team, she was the #4 or #5 pitcher, and rarely saw the plate or the field when she wasn’t pitching. Not exactly the start you’d expect for someone who has done as much as she’s done.

Yet she kept working at it, and didn’t let her lack of opportunity discourage her.

But surely by the time she got high school she was the star, right? No, and don’t call me Shirley!

In this blog post, she talks about being the #2 pitcher behind an older girl until that girl graduated. So the reality is you don’t have to be the starter as a freshman to do great things.

Another pitcher you may have heard of is Cat Osterman. She set all kinds of records as a pitcher while at the University of Texas at Austin, including strikeout ratio, WHIP, and perfect games. She won a gold and silver medal in two Olympic games (2004 and 2008), and had a stellar career in National Pro Fastpitch league. Sounds like a natural, right?

Actually, not. According to this story, she was short, scrawny, and uncoordinated as a youngster. When she tried out for the Little League All-Star team she was the only player they cut. Doesn’t sound like a future Olympian in the making does it?

After that season she went to a travel team, and spent a lot of time watching games from the bench.

But again, she didn’t let it get her down. She just kept working, and eventually become the pitcher she was capable of becoming.

I share all of this because it’s easy to think that today’s stars were yesterday’s stars too. That’s not always the case, however. Players who start with natural advantages in size, strength or athleticism can be passed by those who work harder – especially when nature takes its course and the late bloomers begin to grow.

You can’t control how people perceive you. But you can control how hard you work to get better.

As I always like to say, it doesn’t matter where you start the race – only where you finish it. Take heart in knowing that even some of the best who ever played the game started out just like you – fighting for scraps, and working their way up the depth chart. And remember it’s not how good you are but how badly you want it that will make the difference.

Or, as they say in “Galaxy Quest:”

Ok, now it’s your turn. Do you have a story about a player, famous or not, who overcame a slower start and became successful? Share your story in the comments below.