Most fastpitch softball (and baseball for that matter) hitting coaches agree that tee work is one of the most valuable ways hitters can spend their time. By taking the element of a moving ball out of the equation hitters can focus on developing the mechanics that will enable them to hit the ball harder, farther, at better launch angle, and with more consistency rather than simply trying to “make contact.”

The typical tee is great for simulating pitches from just above the knees up to the armpits on all but those on the most extreme ends of the height spectrum. But what about those extra low pitches that umpire strike zones sometimes dictate hitters must be able to cover?

Without understanding the adjustments that need to be made on shin-high, or just-below-the-knee pitches, hitters will be more likely to swing over the top of the ball resulting in a sinking line drive or a weak grounder. Which, of course, is exactly the result pitchers (and whoever is calling pitches) are hoping for when they throw it there in the first place.

This is where the Jugs Short T is such a great addition to your hitting toolbox. Built with 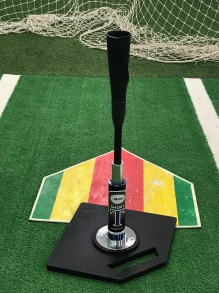 the same durable construction and materials as the regular Jugs T, which was previously reviewed here, the Short T makes it easy to get quality reps going after those pesky low pitches.

Getting down to it

The advantage of the Short T is that it can go as low as 16 inches off the ground, then extend up to 23 inches. (The standard Jugs T starts at 24 inches high.) That should cover the bottom of the zone (and then some) for just about any hitter.

The base is the same as that used for the standard Jugs T, which means if you’re tight on space and don’t mind putting in a little extra effort you can carry one base and two tee heights. They also sell a combo kit with both heights if you are so inclined.

The base itself is heavy enough to keep from getting knocked over even by strong hitters who swing under the ball – no need to carry an extra weight around. It also has a convenient carrying handle built in, making it easy to move from a shed, locker, car, etc. to wherever you plan to hit.

The tee section itself is solid enough to hold its height even after repeated use, yet still slides up and down easily. I’ve had my standard Jugs T for several years now and it holds as well as it did the day I got it – unlike some tees that eventually start sinking the minute you put a ball on them.

You can use it with multiple hitters, day after day, with no worries that it will lose its solid performance over time.

While the primary reason anyone would purchase the Short T is to work on low pitches, it can also be used to address another issue that is common with fastpitch softball hitters – the desire to stand up straight as they make contact.

Part of that habit, I’m sure, is driven by well-meaning but poorly informed coaches who instruct their hitters to “swing level” or “keep your shoulders level.” That’s just not how good hitters hit. Instead, they tend to have a shoulder angle that tilts in toward the ball.

Or it could just be that they got into the habit of standing up straight and never learned anything different. No matter the cause, the desire to finish standing up with shoulders level is a problem.

When you think about how little surface of the bat and ball contact each other, even a deviation of an inch – say from starting to stand up, which pulls the bat up – can have a significant effect on the outcome of the swing. Demonstrate you can’t hit the low pitch well and you will see a steady diet of dropballs and low fastballs for the rest of the game – especially if you’re a big hitter.

A phrase I like to use is “get on it and stay on it.” In other words, adjust to the pitch and then stay there. The Jugs Short T helps train that behavior by forcing hitters to go lower and stay down. If they try to stand up as they swing they will either miss completely or just tap the ball.

That’s what Grace Bradley, a powerful hitter in her own right, is working on in this video.

She is building a pattern where she can go down and dig the ball out to get the kind of launch angle that helps create her high OPS.

After a few practice swings on the Jugs Short T we switched to front toss and she was digging out even the ankle-high stuff for line drives that move base runners and let her trot rather than sprint around the bases.

Whether you (or your team if you’re a coach) is struggling with the low pitch or you just want to train your hitters to adjust better overall, at $75 to $80 retail the Jugs Short T is a great investment. It will help you create better hitters this year. And for many years to come.