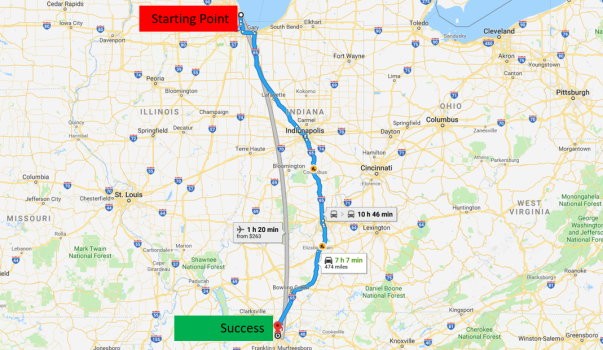 In my travels through the fastpitch softball world, one of the things that continues to amaze me is the perception that if a player can just get with the “right” coach or the “right” instructor, all her (and her parents’) prayers will be answered and all her problems will be solved.

As someone who has been at this for more than 20 years now, I can tell you that’s simply not the case. Getting the right coach, i.e., one who understands the optimal mechanics for a particular skill, how to apply them in a game situation, the mental aspects around them, and most of all how to teach them, is important. The wrong coach can definitely set you back.

But that’s still only half the battle. The other half is the work the player must put in to ingrain those skills into her DNA so they are available at a moment’s notice, without having to think about them.

To understand what the coach contributes v the player, think of the coach as being like Google Maps (or whatever your favorite GPS app is). The coach will show you the way, mapping out the step-by-step path for optimizing all those important factors while avoiding known hazards. But the player still has to get in the “car” and “drive.” Without that second part, the first part is just a wish.

Now, obviously, Google Maps is of little value if the information isn’t accurate. That’s why you want to seek out a coach who knows what he/she is doing. Anyone who has been driving for a while has had that experience where Google or another direction-giving app has taken us to a run-down industrial park, a random cornfield, a road that no longer exists, or some other godforsaken location rather than our intended destination.

Fortunately, in the last few years direction-giving apps have gotten much better. Still, until they’re hooked into self-driving cars they can only show you how to get where you’re going. You still have to do the driving.

So what does this mean to fastpitch softball players? Just that being on the right team with a great coach, or going once a week to a private instructor (no matter what his/her record of success is) isn’t enough. You have to practice, practice, practice. Not until you get it right but until you can’t do it wrong.

You have to be mindful when you practice too, not just watch the clock to see if you’re putting in the time. Work on doing what you’ve been shown. Be aware when you’re not doing it. Learn what it feels like to do it right, so you know when you’re doing it wrong.

How important is that? I can tell you from personal experience that all of the best, most successful players I’ve worked with were also the hardest workers. The better they got, the better they wanted to get.

As they became more accomplished their workload didn’t go down. It went up. They would constantly refine their skills, looking for any improvements they could make that would give them a competitive edge. The ratio between work and improvement would change, with more work yielding less improvement because there was less improvement to be had.

That’s the silver lining for younger/newer/less accomplished players, however. A little bit of work can yield a lot of improvement, and create the success that makes you hungry for more.

Again, however, you can’t just open a direction-giving app – no matter how good it is – plug in the directions, and expect to get somewhere. You have to hop in the car and drive.

Make the commitment and you’ll find you get to your destination a whole lot faster.