← Just Like Novacaine
Softball tryouts – hitting off the pitching machine → 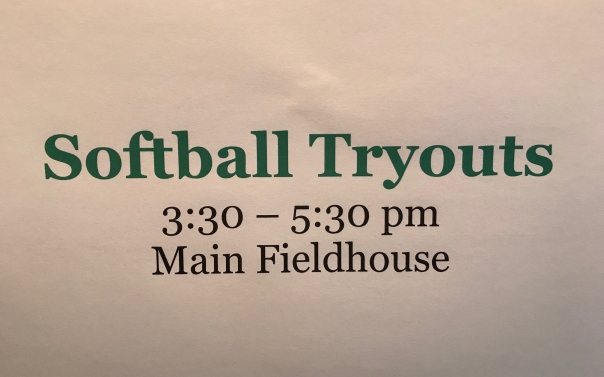 For most of the fastpitch players in the country, the end of February means one thing – high school team tryouts. Whether you consider high school ball the pinnacle of your year or merely something to do until travel ball season starts, it’s an opportunity to show your school spirit and make a contribution to community pride. But before you get there, you first have to make the team.

The best way to assure your spot, of course, is to choose your parents wisely and be born dripping with talent. High school pitchers who throw 65 mph, hitters who can crush a softball 250 feet, and shortstops who can go into the hole, turn and fire for the out, generally don’t have much to sweat.

Neither do those who have older sisters who could do those things. Every high school has its legendary family, and the assumption is the gene pool runs deep enough to cover everybody, whether it really does or not.

But if you’re in the other 99 percent of the players out there, it’s important to make the best impression you can during tryouts. (Hopefully, the legend’s sister doesn’t play your position. That’s often tougher to overcome than actual talent.)

Remember that the amount of time the coach sees you follows a simple formula: your time = the total amount of time for tryouts ÷ the number of players trying out. In other words, if tryouts take a total of six hours and there are 60 girls trying out, you have six minutes to get noticed. Here’s how you can use that time wisely.

Remember, softball is a game, and games are supposed to be fun. Approach it that way, and you’ll be successful. Good luck!

← Just Like Novacaine
Softball tryouts – hitting off the pitching machine →