A different and fun approach to team building

Any time you have a group of people from different backgrounds, skill levels, experience levels, etc. trying to achieve a single goal, one of the staples has been team building. Whether you’re a corporation, charitable organization or girls fastpitch softball team, a little team building can go a long way.

Some of you may remember how the USA National softball team approached it during their run-up to the 2004 Olympics. They worked with the Navy SEALs to get some strength-building as well as military-style lessons in teamwork and bonding. 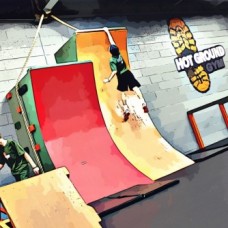 Sounds cool doesn’t it? Maybe you’re thinking you’d like to do something like that with your team – put them through military-style training to help them learn how to work together, overcome obstacles and learn to function as a tighter unit. But of course the SEALs have more important things to do than work with every youth fastpitch softball team that wants to give it a try.

Luckily, at least if you’re in the Chicago area, there’s now an alternative: Hot Ground Gym. Currently located in Northbrook (with a second location set to open in the next few months in Buffalo Grove), it offers that kind of military-style training to kids and teams. They also have a mobile option that will come to you if you have an organization that would like to do it.  (FULL DISCLOSURE: My son Adam is one of the trainers, which is how I learned about what they do. This is not a paid advertisement, just an FYI for coaches looking for something different to do with their teams.)

Hot Ground Gym was started by two military veterans, one a former U.S. Marine and the other Israeli Special Forces, to help kids build confidence, discipline, problem-solving and leadership skills in a fun, supervised environment. A lot of what they do is regular classes where kids come almost every day. But they also have birthday party and team-building options where they will do a 1.5 hour or 2 hour program for a specific group.

The core of the Hot Ground Gym program is obstacles. They have all sorts of them, most of which they built themselves, to challenge kids and teach them how to work together. If the trainers see the kids aren’t challenged, they rearrange or alter the course to get them out of their comfort zones and working hard to improvise, adapt and overcome.

The nice thing about this is it’s both mental and physical. Your team parents will likely love it if you do it because their kids will probably pretty sleep pretty well afterwards. The kids are kept moving constantly, running through, around and over obstacles, climbing, crawling, swinging from ropes and so forth.

At the end of the session you can either just go home, or you can have a little celebration (bring your own food and drinks) to talk about what the team learned and enjoy their successes. And maybe have a few laughs about their failures.

The video on the website home page provides a pretty good idea of what they do, although it’s constantly changing. And don’t be discouraged by the fact it’s mostly boys in the video. Adam says they have a lot of girls do their programs, and those are some of their best performers.

If you’re looking for a way for a fairly new team to get to know each other, or for a cliquish team to break down some barriers, or just a way for your team to learn a little more about how to push past their personal boundaries to do more than they thought they could, it’s worth checking out.

You might even ask that Adam be one of the trainers. He’s an Illinois Army National Guard veteran who did a tour of combat duty in Afghanistan so he knows the whole military aspect. And he earned a couple of medals during training for his leadership skills so he knows how to get groups of people working together for a common goal. He also has a wicked sense of humor, so your players will be entertained as well as challenged.