A player gives back to the game

Been meaning to write this post for a little while because I just find this story to be so cool. It’s about a player named Ashley Lambert who clearly appreciates the opportunity she’s been given to play fastpitch softball. 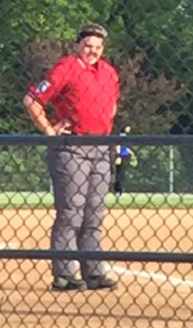 First a little background. Ashley definitely comes from a softball family. She’s been playing since she was tiny, strongly supported by her parents Drew and Tricia. Dan was her summer coach for all but I think one season (when she played for me), and you can keep up with Ashley’s softball exploits by following Tricia on Facebook. That’s where I learned about this story, in fact.

Ashley is in college now, playing third base and catching for Beloit College in Wisconsin. She’s #15 in this photo. Often college players will stay involved over the summer by helping coach a younger team, or maybe doing some teaching or clinics. But Ashley went a different route – she decided to become an umpire!

How cool is that? Umpiring is a tough job. I did it as a kid, and have done it in a pinch as an adult when there wasn’t anyone more qualified to do it. But being a real umpire is both physically and mentally wearing.

The physical side probably isn’t so bad for Ashley. As a catcher she’s used to wearing all that gear in 90+ degree heat and 90% humidity. Heck, it probably feels like home to her.

But then there’s the other side – putting up with coaches, parents and fans who all think they know better but have no interest in gearing up and getting out there themselves. She’s a sweet girl, but I’m guessing when she has the uniform on she doesn’t take a lot of guff. I’ve heard umpires say if both sides think they’ve favored the other team at the end of the game they know they’ve done a good job.

I think it’s great that Ashley is spending her summer making sure that when younger girls want to play a little softball that the game is played safely and fairly. I’m very impressed and proud to know her. I wish more former players would consider donning the gear while they’re playing or when their careers are done.

As a player, you might get a whole new appreciation and respect for the role umpires play; they really aren’t going out of their way to call you out. My guess is you’d certainly know the rules better because you’d have to.

If you’re done playing it’s a way to stay involved in the game, and as the title of this post says give a little something back to the game that gave you so much.

So kudos to Ashley for skipping the more fun and easy route of coaching and instead filling a very pressing need. You are an inspiration and a credit to your coaches, the game, and most of all your parents!