AUTHOR’S NOTE: While technically this post isn’t about fastpitch softball, I know many softball coaches, players, parents and fans are also followers of our sport’s older, slower cousin so once again I diverge slightly from the usual path to bring you what I’m sure many will find to be a fun read.

There is probably no sports franchise that is more storied than the New York Yankees. Love ’em or hate ’em (and there are plenty on both sides) you have to admit that they have long been considered the Gold Standard for success.

In fact, often the best or most dominant teams in other sports are referred to as “The New York Yankees of (FILL IN THE BLANK).”

With all that adoration/hype, it’s tempting to believe the myth that the Yankees have achieved this rarefied status by being able to avoid the missteps, boneheaded plays, under-performing superstars and other issues that plague the rest of the league.

“Spanking the Yankees – 366 Days of Bronx Bummers” by Gabriel Schechter busts that myth wide open. It turns out they’ve made just as many untimely errors, had as many failed saves and critical strikeouts, secured as many draft day and free agent busts, and suffered through as many poor management decisions (looking at you George Steinbrenner) as anyone else. They’ve just managed to win 27 World Series rings in spite of it all.

The author makes no bones about his point of view or reason for writing the book; he has hated the Yankees his entire life, and thus takes particular delight in documenting every misstep in the 318-page tome. Yet you can also detect his grudging respect for what the Yankees have accomplished since they began to play more than 100 years ago.

(Full disclosure: I am a lifelong Chicago Cubs fan, so when my Yankees-loving friend Ray Minchew complains that the Yankees haven’t won a World Series in eight years I have zero sympathy for him. That’s the perspective I come from.)

The book is actually a quick and easy read. It is set up like a journal, walking readers through a day-by-day accounting of the worst thing that happened to the Yankees on a particular day, regardless of the year. Here’s an excerpt from May 8, 1990:

The Yankees lose to the A’s for the fifth time already this season, a 5-0 pasting in Oakland. “This is tough,” admits Yankees manager Bucky Dent. “I’ve never seen anything like this.” Get used to it, Bucky. The A’s sweep all 12 games from the Yankees this season, outscoring them 62-12 in the process (0-2-0-1-0-1-0-1-1-1-2-3). On second thought, Bucky, never mind. Four weeks later, he is liberated from his Bronx bondage, ending his managing tenure with a record of 36-53. Some guy they call “Stump” takes his place, and the Yankees finish dead last in their division with a 67-95 record.

This short format, by the way, makes it ideal for bathroom reading, airplanes and other travel, waiting rooms and other places where you need to be able to get into and out of it easily. Although once you get hooked you’ll probably want to keep going anyway.

Its three sections begin with Opening Day (which occurs on different days) and the regular season, followed by postseason play (with loving emphasis on World Series losses – yes the Yankees have lost more World Series than most teams have played in) and then the offseason. Anecdotes go all the way back to the days when the Yankees were known as the New York Highlanders and played at the Polo Grounds.

So by now you’re probably thinking this is a great gift for a Yankees-hater or the casual baseball fan. You might also want to pick it up to needle your Yankees-loving friend. But funny thing about that.

The Yankees fans I know have a love-hate relationship with the ballclub, and they like to wallow in the misery as much as anyone else.

Yankees fans may actually find the book cathartic, opening up old wounds and letting them once again wonder why certain players never seemed to come through in the postseason, why a particular manager couldn’t handle a bullpen very well, why management paid so much for a free agent that was a star before and after their time in New York but was a total bust while wearing pinstripes and about dozens of other issues that have made their blood boil through the years.

If you love baseball, love or hate the Yankees, or just want a quick, fun read to take your mind off of whatever is bothering you in your real life, give “Spanking the Yankees” a look. I think you’ll find it’s time well-spent.

These days it seems like the Young Adult book category is crowded with stories of dystopian futures and heroic main characters doing the near-impossible. While they make for fun (and profitable) adventures, they may be a little difficult for the average teen to identify with. 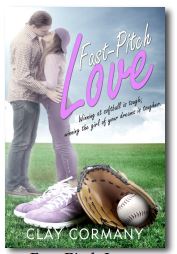 There are no such issues with Fast-Pitch Love, a sweet story of young love that takes place over the summer of 2000. Written by first-time author Clayton Cormany it uses the development of a 12U rec league fastpitch softball team as the centerpiece for self-discovery of several of its characters.

The book is essentially the story of Jason (Jace) Waldron, a central Ohio boy and cross country runner who will be entering his senior year in high school. Jace has a crush on new girl Stephanie Thornapple, whose blue eyes and auburn hair make her the prettiest girl he’s ever personally known. Unfortunately for Jace, she is the girlfriend of tough-guy nose tackle Carson Ealy, who threatens anyone who even looks at her for too long.

As classes empty out on the last day of school, Jace’s best friend Stick – who is quite aware of Jace’s not-so-secret crush on Stephanie – informs him that Carson will be away for quite a bit of the summer working in a lumber yard in Michigan and checking out colleges, creating an opportunity for Jace to try to get in with Stephanie. All he needs is an excuse.

That excuse seems to present itself when Jace goes to the library to make copies of the roster for the softball team his mother will be coaching and his sister Phoebe will be playing on that summer. One of the players is Tina Thornapple; even better, SJ Thornapple is listed as the assistant coach. Jace begs his mother to allow him to help out with the team, figuring it will provide the perfect atmosphere to get to know Stephanie and win her away from Carson. She agrees, gets league approval for an extra assistant coach, and the stage is apparently set.

At least until the first day of practice when SJ Thornapple turns out to be Sylvia, Stephanie’s slightly heavier and somewhat less attractive sister. Once Jace realizes his mistake he starts thinking of excuses to back out but agrees to stay until the first game. In the meantime, Sylvia immediately recognizes why Jace signed up and offers to help him start dating her sister, even if he leaves the team.

Then the games start up, and the young Valkyries take a pummeling. Although Jace was never big on baseball when he played he feels bad for the girls and decides to stick around a little longer to help them learn the game. He and Sylvia work closely together to teach them how to throw, catch, field balls and hit. Sylvia is true to her word and helps Jace land his first date with Stephanie. As the summer goes on the Valkyries begin to improve – but that isn’t the only change.

Soon Sylvia starts letting her hair down and wearing makeup to practice and Jace finds himself attracted to her, even as he continues to date Stephanie. The latter sets up a confrontation with Carson when Jace is spotted at a carnival with Stephanie by one of Carson’s friends – just at the time Jace is beginning to wonder whether he is dating the right sister.

While it takes a little while to get going at first, Cormany does a great job of creating characters you care about – and feel you know. As I got deeper into the book I found it difficult to put down. Adults who remember their youth fondly will relate to the uncertainty and mixed feelings of the characters, which create tension without getting too deep into teen angst. Their feelings seem real. The young adult audience will likely either identify personally with the primary characters or feel they have friends like them.

The softball games are described with accuracy for the level. Neither the Valkyries or their opponents are portrayed as top-level travel teams. In fact, players are told at the beginning of the season they’ll be playing 11 games through summer plus the league tournament. That’s like a week in a travel team schedule, so hard core travel players and parents need to get past that.

Given the level of play, the game descriptions themselves stay true to form. Cormany describes them in great detail, giving you the feeling you’re reading a recap of a real game. There are errors and difficulties for both teams, again true for the level of play, which helps ground it in reality.

As a long-time travel coach myself I’m not so sure that the practices Jace uses to help the team improve will really work, and one in particular goes against what would be considered a best practice. But really, that’s a quibble. The key is the relationships between the characters and the overall development of the team. Both of those ring true.

There aren’t many stories out there that have fastpitch softball at the center, so young players and their families should enjoy that part of the book particularly. If you’re looking for an enjoyable read that will have you rooting for the characters to succeed – and to do what you know is the right thing – give Fast-Pitch Love a look.

Fast-Pitch Love is currently available digitally from Barnes and Noble at http://www.barnesandnoble.com/w/fast-pitch-love-clay-cormany/1120679928?ean=29401503840 or at Amazon.com at http://www.amazon.com/Fast-Pitch-Love-Clay-Cormany-ebook/dp/B00P744M7Q. The price is normally $4.99, but the author says he occasionally discounts it to $1.99 or even 99 cents so keep an eye out for that. There are also plans for it to come out in hard copy, although it hasn’t happened yet.

Do me one favor. Once you’ve had a chance to read it, let me know what you think by leaving a comment below.