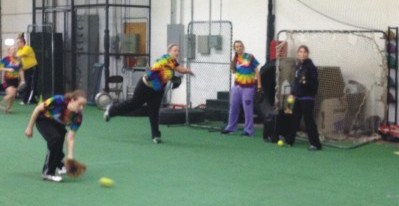 First of all, thank you for stepping up. Coaching isn’t easy, and it can be very time-consuming, but with the right attitude it can also be very rewarding. Not necessarily financially, but personally.

That said, if you’re new to coaching a team here is one of the most important lessons you can learn early: there is nothing more counter-productive to success than players just standing around waiting to do something.

The absolute worst, of course, is the typical rec league practice where the coach pitches to one player while the rest stand around in the field waiting until the ball is hit. Never, ever, EVER make that your practice, because basically you have one player sort of learning something, or possibly improving, while everyone else is having their time wasted.

What you want to do instead is plan out your practices so every player is getting a lot of touches/swings/repetitions throughout the entire time.

One good way to do that is to split your team into two or three groups (depending on what you need to do) and then have each group doing something different. For example, one group can be fielding ground balls that are hit to them, another can be fielding fly balls that are thrown or hit to them, and a third can be working on hitting. The hitting group can even be going through a series of drills/activities to keep things moving even more.

If you have two groups, one can be working on throwing drills/form while the other does hitting or fielding. There are plenty of variations, especially if you have good assistant coaches or even willing parents on hand.

What if you’re by yourself and need to keep the entire team together? You can still keep things moving quickly. Throwing drills like the star drill, or around the horn where you throw left and run right, can build skills while again keeping things moving. If your team needs to hit, you can pair up players and run six or seven hitting stations at the same time. All you need is a fence and some tees, although portable nets also help.

You can even do combo drills. One I liked to do was to have one group hitting off front toss while a second group worked on base running skills such as recognizing ground balls faster or going from first to third on a ball to the outfield. Lots of activities for small groups let you keep practice active. Constant repetitions also allow you to build conditioning into skills rather than having to do it separately during practice.

So how do you work all this in? I used to use the outline function in Word to list out everything I planned to work on that day. There would be a heading, and any notes or specifics would fall under the heading as sub-bullets. But the real key was placing times against each section.

For example, if we were going to do groups for hitting, infield, and outfield, I would look at which would take the longest to get through and place a time against it. Then I would extend that time to the other two groups, making sure to have enough different things to work on to keep them interesting.

In this example, say we had three groups of four. If I set up four hitting stations at five minutes each, that was 20 minutes. Infield and outfield would also be 20 minutes, with two or three drills depending on what was needed. Rotate through all three groups and there’s an hour’s worth of practice right there. Add in warmups, dailies, a five-minute break, and some situational work and you have a great, active 2-hour practice.

Of course, I’d usually have one or two other activities on the list, just in case we ran short (although we rarely did). Anything we didn’t get to this time would go on the list for the next practice.

If we were indoors in batting cages, I often would bring in players in groups of three or four for 45 minutes at a stretch. That was plenty of time to get them lots of hitting reps while keep the group size manageable. When their 45 minutes was up the next group would come in, then the next. It was quick and intense for the players, although it did keep the coaches there for 2:15 instead of a typical 2 hour practice. Still, much was accomplished that way.

One other important element in building practices is one I learned from John Tschida at the University of St. Thomas: never have the same practice twice. Always, always mix it up. It builds more skills, and keeps it more interesting for the players.

Fastpitch softball is a tough game, with much to learn – both in terms of skills and strategy. It requires a lot of anticipation and snap decisions based on a multitude of ever-changing factors. That’s what makes it exciting. But that’s what also makes it critical to use your practice time wisely. There just isn’t any time to waste.

Keep things moving at practice and soon you’ll be the coach everyone wants to play for.