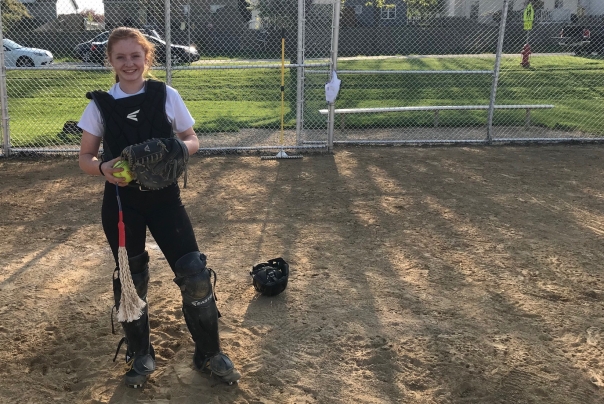 It doesn’t take too much time going through Life in the Fastpitch Lane to see that I am pretty fanatical about good throwing mechanics. I definitely feel overhand throwing is one of the most under-taught skills in the game, which is a shame because it’s such a big part of the game (unless you have a pitcher who strikes out 18 hitters a game, every game).

So that’s why I was excited to receive a new (to me) product to test – The Softball ROPE Trainer by Perfect Pitch and Throw. According to the manufacturer it is designed to help softball (and baseball) players learn the proper mechanics for a powerful, strong and safe throw by unlocking the joints in the proper sequence. From their website:

You can read more about the theory behind it and how it helps prevent injuries here.

The basic design is fairly straightforward. It’s basically a softball with a plug system that lets you attach one or two sets of ropes. By focusing on getting the ropes to work 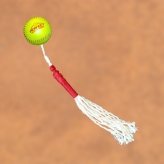 properly (and not smack the player on the head, legs or other body parts), The Rope Trainer helps players find the right path to slot their arms and follow-through properly.

You can add more resistance by using both sets of ropes to create more of a strength workout, although the grip will then not be the four-seam grip most players are used to. No worries, though. You’re not actually going to throw the ball anyway.

The manufacturer positions it as an upgrade over the old “towel drill,” where a player holds a small towel and goes through the throwing motion with the same goal in mind. In fact, here’s an article that tests The ROPE Trainer versus the towel drill. They tested the baseball version rather than the softball version, but I’m sure it’s the same.

One of the big differences in my eyes is that the ropes can swing around more than a towel, so the player has to be more precise in her arm and hand path to get the right results.

Ok, sounds good in theory. How did it work in practice?

The first girl I had try it was a terrific 14U catcher named Liv. She wanted to learn how to throw from her knees, so it seemed like the perfect opportunity to check it out.

One of the big issues with catchers, especially young ones, learning to throw from their knees is that they tend to only use their arms. They don’t get into a good position to use their shoulders, torsos, glutes, and other big muscles, and they have a big tendency not to follow through after throwing.

So I put on one of the sets of ropes, handed Liv the ball, and had her get into a runners on base stance.  When I said “go” she reacted, getting into position and using The Rope Trainer as if she was actually making the throw.

As I said, Liv is awesome so after a couple of attempts she got the hang of getting the ropes to whip through to her left side at the end. Here’s a video of her as she’s using it:

Then we switched her to an actual ball. She immediately was able to make the throw with good juice on the ball, and with great accuracy too. Most important, she was using a strong throwing motion that will protect her arm and shoulder.

To give you an idea of how strong her throw was, this is what happened to her mom’s wedding ring after receiving a few at second then at first. Oops.

Of course, it’s easy to get something to work when you have an excellent player using it. So for another test I went the other way.

I took a younger girl (who shall remain nameless) who did not have a particularly good throwing motion and had her try The Softball ROPE Trainer as well. While the results weren’t quite as instantaneous, she also showed improvement.

This particular girl was doing the classic “throw like a girl” of dropping her elbow below her shoulder and just sort of shoving the ball forward with her arm.

(NOTE: Don’t even bother telling me how horrible I am to use the phrase “throw like a girl” and wonder how such a nasty misogynist could ever work with female athletes. I encourage my students to throw like softball players, and will put them up against any male player their age – or any dad who doesn’t think girls can throw hard. So chill.)

After working with The Softball ROPE Trainer for about five minutes she was doing better with her overhand throws. I doubt that little session was permanent, but I wanted to see if it would make a difference.

I believe it did, and that with repetition at home and/or practice someone with poor throwing mechanics could re-learn how to throw properly, most likely within 2-4 weeks with regular work.

The other nice thing about The Softball ROPE Trainer is that it doesn’t cost very much. You can purchase it direct from the manufacturer for just $67.49. I know, weird price, right?

For that money you get the ball, two rope sets (I think – the website says one but mine came with two), instructions and a nice drawstring bag to hold it all. If you wear out the ball or one of the rope sets you can purchase new ones as well, which is always nice.

If you have or know players with poor throwing mechanics, or have someone with good mechanics who want to get better, give The Softball ROPE Trainer a try.

Oh, and in case you’re wondering, I don’t know how it is for fastpitch pitching yet. That’s next on my list to try. Seems like if you have mechanics that focus on whipping the ball through the release zone instead of pushing it The Softball ROPE Trainer might work. We’ll see.

If it works, I’ll do another post on that. If not, I’ll update this one.