Congratulations to Kate Kiser for signing at Bowdoin

This one is going to be a bit unusual because it’s actually not about a fastpitch softball signing. But I still want to offer my public congratulations to a terrific young woman, Kate Kiser, on her signing to play volleyball at Bowdoin College in Maine next year. Go Polar Bears – coolest mascot ever (pun intended).

So why is a softball guy talking volleyball? Because before she became a bigtime volleyball player with scholarship offers at all levels from all over the country, Kate was also a terrific pitcher and hitter.

I first met Kate when she was 9 or 10 years old. This was shortly after she’d survived a vicious attack by a large dog that had done so much damage she had to wear a pressure mask for a few weeks and had very visible scars. 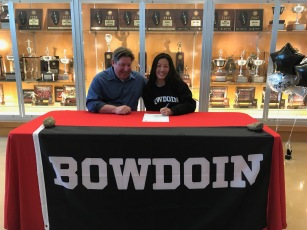 Kate was rather shy and quiet those first couple of lessons, but we hit it off pretty quickly. She was a diligent student, even at that age – one of those you don’t have to worry about whether she will practice in-between lessons or not. She had a rare will to succeed in whatever she did.

I remember after a few weeks she had a game, and was going to pitch. Her mom asked if she should try to do what I was teaching or do it the old way, and I said give it a try, and if it doesn’t work than do what you need to for now. This was during fall ball, so no harm, no foul.

She continued to develop, and after a while hitting lessons were added to the mix, perhaps when she was 11. Because of her busy schedule, as well as mine, lessons often didn’t start until 10:00 pm – pretty late for a young girl. But she was always full of energy.

One of the things I remember most about Kate is her curiosity. I encourage questions during lessons, and Kate would ask them. But then, when we were done, Kate would say “I have one more question,” which really was a lie because she had many more questions. 🙂 We’d chat until her mom decided everyone needed to get to bed.

At first, as a player, she had a rough time. She got onto a Daddy Ball travel team that had its favorites and its “all you others.” You know the type. Whatever Kate did wasn’t good enough for them.

I remember hearing about one tournament at a location where they had to stay in a hotel. She and a good friend of hers didn’t get on the field for pretty much the entire weekend. At 10! It was tough, but she bore it with grace and kept working.

By the time she got to 14U much had changed. By now she was drawing looks from college teams, pitching and hitting up a storm. (Her mom told me at the signing ceremony she was still getting contacts from college softball coaches even though she hadn’t played since her freshman year in high school.)

She built quite a reputation for herself, at least within the general region. People marveled at her “natural talent.” Her mom and I just had a good laugh about that. Because while Kate is undoubtedly a wonderful athlete, none of them were there when she couldn’t find the plate, or I had to cajole her to stop thinking so much and just let the pitch fly, or to “see ball, hit ball” instead of over-analyzing everything. It was her work ethic, not just her athleticism, that got her to that point. 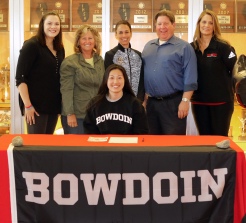 Unfortunately for me and some college softball team, along the way Kate started playing club volleyball. She became a star there too, and eventually had to make a decision on which sport to play.

I blame myself for her decision. She always said her dream was to play for me as her coach. One day, when my 18U IOMT Castaways were going to be short a player for a practice game, I invited 14 year old Kate to come out and guest play for us. She did fine, and then apparently checked it off her bucket list. Just kidding, Kate. If you see her on a volleyball court you know why she went that way.

I do claim credit for two major things in her life, however. I introduced her to the music of Creedence Clearwater Revival (her tastes ran more to classical music at that time – did I mention she also played piano?) and I talked her mom into buying Kate her first Shamrock Shake. For better or for worse, long after she’s player her last game she’ll have me to thank for those two things.

All kidding aside, I am thrilled that Kate, once again after too much thinking, finally decided on her college. She plans to be a surgeon someday, and Bowdoin will be a great place to get that journey started while still being able to play volleyball. And you never know – maybe the softball team will need one more player to help them out and Kate will agree. Right after she asks one more question.

Congratulations, Kate. I know you’ll do well, and I wish you all the best!