Huge congratulations are in order for University of Wisconsin – Madison pitcher Kirsten Stevens on being named the Big Ten Pitcher of the Week. Can’t say it comes as a surprise, though, after the weekend she had. 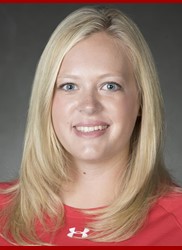 Kirsten toss not one but two shutouts in earning her third and fourth wins on the season. And this after being sidelined for most of the off-season with a broken foot.

When the accident first occurred it looked like the Badger might miss the first part of the season. But with a strong work ethic and help from the Wisconsin coaching staff and trainers, she beat the prognostications and is back on the field.

And what a pre-season it’s been. Kirsten is currently sporting a miniscule ERA of 0.28, which is what happens when you’ve only allowed one run for the season so far. Over the weekend she also had a personal best 11 strikeouts against Hofstra, continuing the blistering pace for Ks she set as a goal before the year.

And the best part? Kirsten is one of the nicest human beings you’ll ever meet. Always with a smile on her face, always remembering to have fun, and always making time to speak with and encourage the young players who look up to her (literally as well as figuratively) when she meets them.

All we can say here is keep up the good work! And again, congratulations to both you and the team who helped you achieve a well-earned honor.