The other night I was working with a very young pitcher named Kaitlyn on her basic mechanics. She’d been off pitching for a few weeks and was just getting back into it.

As we were working I noticed she was cutting her arm circle off toward the bottom, with the result that she was pushing the ball through release. As you can imagine, the result was the pitches were slower and rather erratic.

I wanted to help her get back on track and get into a position to whip the ball through release as she should. But one of the challenges of working with pitchers who are 8 or 9 years old is figuring out a way to communicate what you want (and why) to them.

As I and others have said before, young children are not just short adults. They think differently and have a different frame of references than adults. So it’s important to come up with ways of explaining things to them that make sense.

In this case, saying “you need to whip the ball through the zone” wouldn’t have meant much. So I thought, “what would help her understand?” That’s when I came up with this idea. 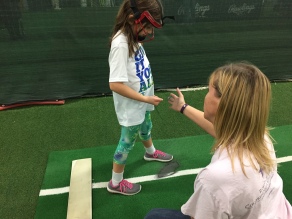 I knelt down in front of her, held my hand out, and told her to punch my hand. (That’s not me in the photo, obviously. That’s her mom, who is much more photogenic than I am. You’re welcome.) She made a fist and pushed her hand into my hand.

I then told her to pull her hand back again, and this time slap my hand instead of punching it. This time she used a motion that was more like whipping the ball. 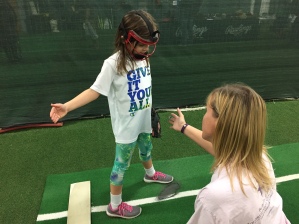 After one more punch and a few more repetitions of slapping, we went back to pitching. Bingo! She started coming through with a whip, and the ball started coming faster and more accurately.

So if you have a pitcher who struggling to feel that acceleration of the lower arm past the upper arm, give this one a try. And if you do, let me know how it works in the comments below.