← It’s not where you start the race…
Way cool: Slugger lets you customize your bat →

Sticking with the change

Regular Life in the Fastpitch Lane readers know that I am a huge fan of the changeup. I believe it’s essential if a pitcher is going to keep hitters off balance instead of getting comfortable in the batter’s box. 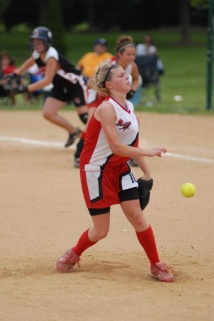 Still, it can be tough for a pitcher to stick with it when it’s not working. If she doesn’t throw if for a strike the first time there is a temptation to just abandon it in favor of other pitches.

What’s odd is that if the other pitches don’t work she usually doesn’t abandon them. It seems peculiar to the change.

That’s what made what I observed tonight so interesting. I was watching a high school sectional game between two very good teams. The pitcher for the team I was rooting for was definitely having trouble with her change. Not just a little trouble either.

She was throwing them high – catcher has to jump up for them high. And she was throwing them low – as in rolling into the plate. In fact, I only remember her throwing one for a strike, called or swinging. Even on her best day it’s not her best pitch, but it’s usually more effective than it was today.

Yet she kept throwing it. Whether it was the pitcher, the catcher or the coach, when the situation called for a change they called it.

And darned if it didn’t help. As the hitters were getting on to her other pitches, the change would give them a different look. Even if it rolled in, it was enough to throw off the rhythm.

The team I was rooting for won. And as I recall there were only two or three well-hit balls all day. It was a great illustration of why you want to keep throwing the change, no matter what the outcome of the pitch is.

← It’s not where you start the race…
Way cool: Slugger lets you customize your bat →