Pujols’ position early in the swing

This post is actually a continuation of a discussionhappening on the DiscussFastpitch forum. I was trying to make a point over there, but I needed pictures to show it. Couldn’t figure out how to put them up there and so I tried doing it with Facebook. But you have to have an account with Facebook to see them, apparently, and since most adults don’t that wasn’t the answer. Then it hit me. I have a blog. Duh!

In any case, it started as a discussion of the back elbow being elevated or down, and then got a bit off track into what the shoulders do.

I’m a back elbow down guy. I really don’t see the value in putting it up, but I do believe it can be restrictive in the swing. As an example of a top baseball player who starts with both elbows down, I show this photo of Albert Pujols: 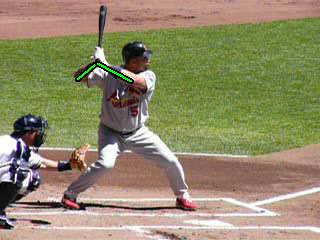 Notice the green lines, that trace his forearms. They are forming an upside-down V. The back elbow will elevate some as he goes into launch, but this is where he’s starting.

Then came the shoulders. Some advocate keeping them parallel to the ground. I used to also, in fact up to this year. But then I saw evidence of top hitter after top hitter lowering the front shoulder going into toe touch. Here’s a look at Pujols at that point:

The red line traces the angle of his shoulders. While his upper arm does look to be parallel to the ground it seems to me this is due at least in part to the shoulder angle. Notice also that his hands are tied to his back shoulder, not over his back foot as is often advocated.

Like this or not, you can’t argue with the results!