And your qualifications are…?

Imagine you are going into the hospital for a simple appendix operation when your doctor informs you that the person performing the surgery will be a youngster fresh out of medical school, with no actual experience but plenty of practice operating on cadavers. Oh, and there won’t be a more experienced doctor in the room, but they’ll be around if needed.

Or you’re being sued by someone for everything you have after a fender-bender accident and your law firm informs you that your case will be defended solely by a law student who’s never tried a real case before but did “really well” in college mock trials.

How would you feel? Would you be confident, or would you find a lack of experience to be worrisome?

Now think about what often passes for coaching in fastpitch. A recent college graduate who played college softball is hired and handed the reins of a team. Or a former college pitcher with no teaching experience is installed as the pitching coach, I guess under the assumption that if she did it she can teach it.

Well, gang, I’ve played musical instruments for more than 40 years, but I wouldn’t say it qualifies me to be the band director at the local school. Performing a skill and teaching it are two separate things. Many college pitchers are able to pitch, but they don’t necessarily know how they do it. And knowing the how and why is essential for teaching. Otherwise you may just be repeating the bad advice you received and very likely overcame in order to be succesful.

The same goes with hitting. Mike Epstein’s whole system is based on the idea of “Do we teach what we really see?” He contends that the answer is often no. Instead, we repeat what we’ve heard. Whether you agree with Epstein’s system is not important. But what is important is whether what a coach tells you to do is based on knowledge and experience, or simply something he/she has heard along the way.

Think of it this way. Suppose you’re a high school player who has taken hitting lessons for a few years from a qualified coach. You’ve had good success and improved each year. Now the new high school coach, fresh out of school from her playing days, comes in and tells you you’re doing it all wrong and should change to do it her way. What if you asked her this simple question: what are your qualifications for teaching hitting? What would she be able to say? That she played at Wherever College (a D3 school, by the way) for four years and hit .313 lifetime? Ok, that qualifies her to play high school softball. But does it really qualify her to teach hitting to others?

If I was hiring her to be my daughter’s private instructor I’d want to know how long she’d been coaching, what certifications she had or classes she’d taken that focused on hitting theory or how to teach, etc. If all she’d done was play fastpitch softball, with no coaching experience, I’d have to pass.

It is vitally important to the sport that we encourage players who have finished their careers to go into coaching. But it’s just as important, for their sake as well as the team’s, not to just assume that the ability to play equals the ability to coach. Instead, we need to mentor these young ladies, have them work with more experienced coaches, and let them grow into the position just as you would in any other business position. Otherwise we’re setting them and their players up for failure. And they won’t even realize it until they (or their players) quit in frustration.

Another cue for the backhand change 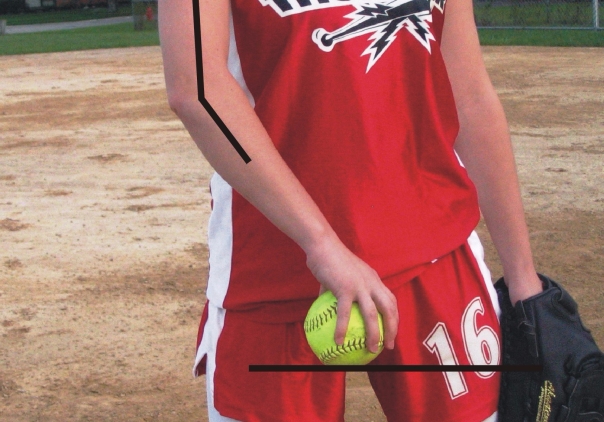 One of the keys to keeping the backhand change low and hump-free is maintaining a slight bend in the elbow as the hand comes through. In this position the ball comes through before the rest of the arm.

Ok, that sounds good in theory. But it can be tough to get the feel of how to get the arm properly bent. Here’s a new cue I’ve found that helps pitchers get in the right position. Have the pitcher bring her thumb across the spot where the hip bone and the thigh bone meet. In practice she can actually touch her hip area at that point. The arm will bend and she’ll be able to keep a flat release.