You Won the Genetic Lottery. Now What?

Most of the time my blog post are more oriented toward players (and their parents) who, shall we say, don’t have the greatest athletic gifts. Not to mention coaches who are trying to make their teams competitive through sheer hard work.

Today, though, I am going to turn that concept on its head. This one is for those players who won the genetic lottery.

You know the ones. They are naturally bigger, stronger, faster, with better eyesight, better hand-to-eye coordination, more fast twitch muscles and other attributes that most of us wish we (or our kids/players) had.

They are always a big fish, no matter what size pond they’re in.

Here’s my message to those players and their families: that genetic lottery has more than one winner. In fact, while the total number may be small compared to all the players who play the game, it’s still much larger than the number of spots on coveted teams.

Which means if you want one of those spots you need to keep working hard. Probably even harder than players with lesser natural ability because all your real competition is at least as able as you. Maybe even more gifted.

I know that may be hard to believe, especially if you don’t get to see a lot of ultra-talented players wherever you play. But believe me, they’re out there.

When you have more natural ability than everyone else it’s easy to fall into the trap of relying on it. After all, if your overhand throw is 60 mph and all your teammates’ (and opponents) are closer to 50 mph it’s easy to think you take it easy in practice or just rely on your ability in a game.

Which means you need to make sure your skill level and understanding of the game, not to mention your mental game, is on a par with them.

My suggestion, if you want to find a local role model, is to look at the player on your team, in your league or conference, etc. who doesn’t seem to have a lot of natural ability but is succeeding anyway. That player got there by working harder than everyone else and not getting discouraged when she failed.

Instead, when she failed she used it as fuel and a learning experience to help her get better.

That girl has to have better technique at whatever she does because if she doesn’t she’ll never see the field. Coaches aren’t falling all over themselves to get her on their team or put her in their lineup, so she has to prove herself every time she steps across the chalk line.

Study her. Learn from her. Do what she does.

If she boots a ground ball, she probably asks for another one. Do the same.

If she’s struggling to hit she doesn’t go into a funk. She pulls the tee out and works on whatever she knows her issues are. And believe me she knows what they are because she pays close attention when a coach is working with her.

Basically, instead of acting like a “super talent,” instead become a grinder. Work to gain the best technique not because you have to today, but because one day you will need it. Gain that mentality and you’ll find the road to the top is significantly easier than it would have been otherwise.

Talent, athleticism, whatever you want to call it, is definitely a good thing. If you won the genetic lottery be sure to thank your parents early and often. Genetics can’t be taught.

Don’t let that ability sucker you into complacency, however. Approach the game like you were the last one to make the roster instead of the first one invited and we just might see you on ESPN one day.

Photo by Lay Low on Pexels.com

Another Approach to Improving Pitchers’ Ability to Hit Spots

A few months ago I put up a post that showed a way to help fastpitch softball pitchers who were struggling with hitting their inside and outside spots by exaggerating the locations. The idea is that by making the adjustments larger you can help them get a feel for what it takes to move the ball from side-to-side.

Here’s another way to do it, using kind of the polar opposite approach. This is more for fine-tuning, when the pitcher is already pretty good at going inside/outside but you want to make it more precise and reliable.

All it takes is some scrap wood and a couple of pool noodles. What you want to do is create two narrow barriers, then have the pitcher attempt to throw the ball between them. Here’s how it looks from the back side:

What you’re trying to do is create a visual that helps the pitcher home in on exactly where the ball needs to go. Sometimes, when they’re looking at a catcher against a background, it’s hard to focus on that small spot. This setup helps narrow the field so to speak. 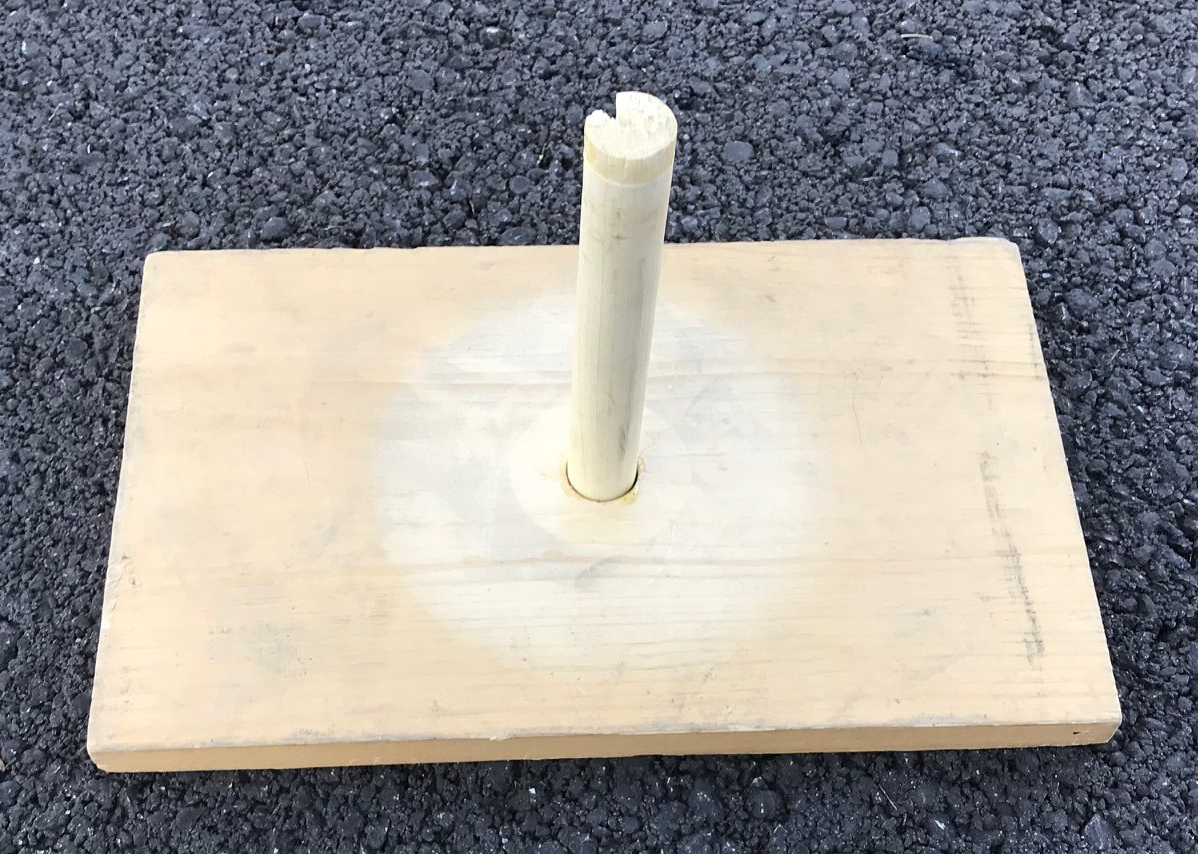 The holders for the pool noodles were a couple of scraps of 1×6 pine board with a hole drilled partially through them. The holes should be just slightly larger than the diameter of the dowel rod.

Once you cut the dowel rod to size, glue it in place and then drive a screw in from the underside. That should hold it securely.

This side looks even better.

As you can see in the photo and the video, I didn’t use a very long dowel rod, which means the pool noodles aren’t very straight. I could have gone longer, but if the pitcher hits the noodle (as she is likely to do) and it is rigid the deflection could hurt whoever is catching if they’re not wearing equipment.

Besides, when they’re hanging over like this you can create some interesting holes to throw through, such as having the tops touch to work on keeping the ball low as well as on the corner.

You can do it from a 45 degree angle, like Juliana is doing here (due to a sore knee) or from a full pitch position. You may want to start with the former just to get the feel down before moving on to the latter, which will be more challenging.

Once the pitcher is becoming more consistent you can even make a game out of it, challenging her to make 7 out of 10 to win a prize or suffer a consequence – whichever fits your coaching style. That will add a little more game pressure too.

Or, if you have two or more pitchers there have them compete for who can do the most.

The overall idea is to aim small and miss small. So if you have a pitcher who needs to gain more precision in hitting her spots, give this drill a try.