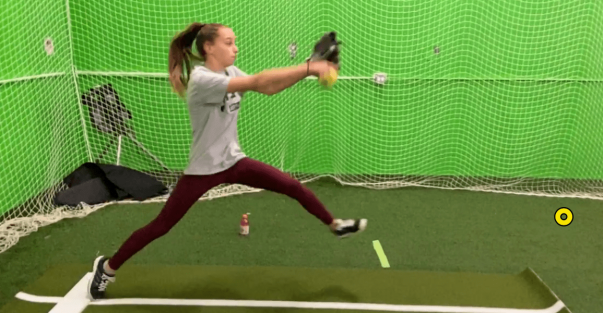 Fall ball is either behind us already as well, or there is one more weekend to go. Then there’s a lull before it all starts again.

It’s definitely a great time of the softball year to take some time off. Rest and recovery is a good thing, and now that we have joined the indoor sports in playing practically year-round it’s tough to find a few weeks you can string together to let your body (and mind) heal from the grind.

For some, however, this might be a great time for something else – i.e., hitting the reset button and either correcting major flaws or making major upgrades in mechanics and approach.

There is never a bad time to work on improving yourself and your game. But making major changes carries some risks when you’re also expected to play at your most effective level during the week or on the weekend.

Let’s take pitchers for example. To achieve all she’s capable of, a pitcher may need to work on her posture, or her leg drive, or her ability to whip the ball through the release zone. But it can be difficult to work on those things if doing so causes her to be wilder than when she sticks with her old habits.

Most coaches would rather have their pitcher bend forward and throw consistent strikes than work on staying upright and throwing too high, or too low, or too wide. Especially if that pitcher is their #1. That’s just the nature of things, and it’s very understandable.

Still, every pitch the pitcher throws bent forward so she can throw a strike is another step in the wrong long-term direction. And it will take her that much longer to get to where she needs to be to reach her potential.

It’s the same for hitters. Working on developing a better swing that will make a hitter more effective at higher levels doesn’t always yield great results at first. Anything that’s different is uncomfortable at first, and hitting is so dependent on quick reactions that walking the line between the old and new swings may throw the hitter off entirely.

Again, most coaches will take a good hit with an ugly swing over strikeout or weak ground ball or pop-up with a good swing. They’re not interested in how many home runs that hitter will hit in two years with her new and improved swing. They’re focused on getting her on base, or scoring that runner on third, now. Can’t say I blame them. I would be too.

Once upon a time there were three distinct parts to the season. There was the off-season, which lasted a few months, then the pre-season for a month or two, then the actual season.

That’s not the case anymore. Fall ball has gone from being a time of once-a-week practices and a game here or there to almost the equivalent of the summer season. Some of the tournaments in the fall are arguably more important than many in the summer for those who play in college, because college coaches are in attendance in droves. You don’t want to look bad in front of a gaggle of college coaches.

So right now, from the beginning of November to the end of December, is about the only time for players to make major changes in a safe environment. Pitchers can work on improving their drive mechanics, or their posture, or other core fundamentals without having to worry about the results of the pitch.

They can throw the ball all over the place for now, as long as they do it with the correct mechanics. It’s a form of failing up. Not to be confused with the version where someone sucks without trying to get better but gets rewarded anyway. As they replace old habits with new ones the control will come back – and be better than ever.

Hitters can work on developing their swings without having to worry about the consequences. As they move from conscious competence (having to think about how to move correctly) to unconscious competence (not thinking about what they’re doing but doing it right anyway) they can shift 100% of their focus to seeing the ball and hitting it hard. Suddenly all those cage pop-ups and ground balls start turning into rising line drives that smack off the back of the cage – and rebound back at the hitter if there is a solid wall behind the far end.

Everyone can work on their throwing mechanics – still one of the most under-taught parts of the game. Instead of measuring success by “the ball got to where they were throwing” fielders can develop mechanics that will help them throw harder and faster while protecting their arms and shoulders from injuries.

Most times of the year the pressure to perform in games out-ranks the desire to make improvements. Not right now.

For those who know they need to make major changes, this is the ideal time. Get to work, either on your own or with a qualified instructor, so by the time you start up again you’re ready to play (and show) better than ever.

And if you’re not in need of major rework, enjoy your time off. You’ve earned it.