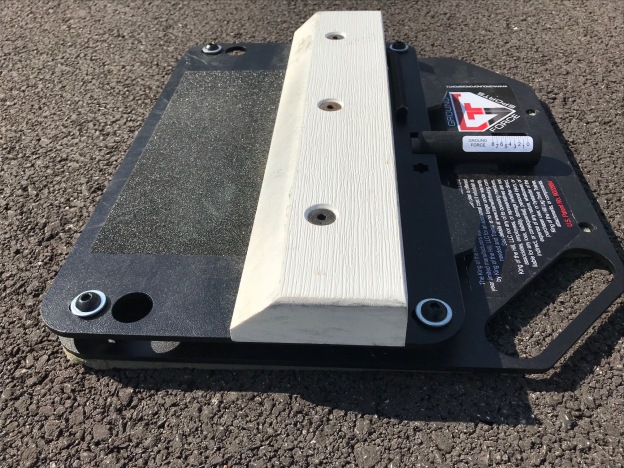 Leg drive for fastpitch pitchers often falls into that category of “I know it when I see it.” But explaining how to get it if it doesn’t come naturally to a pitcher is a whole other challenge.

That’s where a new product called the Queen of the Hill (QotH) from Ground Force Sports can be – shall I say it? – a game changer. Instead of explaining to pitchers that they need to push off harder from the pitching rubber, the QotH lets them experience whether they are doing it or not – not just with their sense of feel, but with sound.

The product itself is pretty simple on the surface. It consists of a base plate, plus a spring-loaded top plate that has pitching rubber attached to it. The front of the pitching rubber

has a 45 degree angle to it, which right away encourages pitchers to get into a better drive position before they ever throw a pitch. (Leaving your foot flat on the ground is no way to achieve a powerful leg drive.)

To use it you can lay the QotH on the flat ground, or place it in front of the pitching rubber on an indoor mat or field. Then, using the included Allen wrench that is held on the back of the rubber, you set the tension level on the QotH.

NOTE: The Allen wrench is designed to be held very securely after you insert it into the hole in the back of the rubber. That’s a good thing for transport, so you don’t lose it, but not so good if you’re in the middle of a pitching session and you want to make a quick change of tension. After my first time using it in lessons I discovered the best approach is to stick it in your pocket after the first use, then return it to the holder when you’re completely done with it.

Once the QotH is set up the fun begins. Make sure the pitcher places the sole of her foot against the angled surface on the front of the pitching rubber. She then goes through her normal windup and throws a pitch.

If she uses her legs to explode with a powerful push-off, you’ll hear a “click-click” as the top plate slides back then comes forward again. If she just throws her stride leg forward without getting a good push, you’ll hear nothing.

And that’s the beauty of the QotH. The pitcher doesn’t just feel the movement of the top plate – she can hear whether she was successful.

That audible cue tells her (and everyone else) right away if she got into her legs or not. If not, she knows she needs to work harder, helping her build the good habits that will result in better drive mechanics.

Of course, you also must be sure to set the level properly. Asking a 70-lb. 10 year old to make the QotH click at Level 8 is unrealistic, no matter how hard she tries.

What I have found works is to set the level light in the beginning, in the 2-4 range depending on the age and size of the pitcher, then work your way up from there. The tension should be set so the pitcher can get the “click-click” with strong effort, but not with anything less than that. When she is getting a “click-click” every time, it’s time to increase the tension level. I usually move it up by one number, so say from 5 to 6.

The product itself appears to be very solid and well-built, so it should last a long time. It’s very heavy – I believe it weighs about 25 lbs. – which is good, because that means a strong pitcher won’t be pushing it backward as she drives out. But it can be a shock if someone tries to pick it up without realizing how much effort it takes.

My only quibble with the design is with the carrying handle. The inside part has very square edges that make it a bit painful to carry, especially over a longer distance. I’m sure a little duct tape would take care of it, but it would be nice if those edges were rounded out a bit more.

So far, the reaction from the pitchers I’ve tried it with has been overwhelmingly positive. One of the first, a high school pitcher named Allison, smiled and said “I want one!” after just a few pitches. She could feel the extra launch she was getting right away – almost as if the spring was pushing her out (which it wasn’t).

Other pitching students who have tried it, whether they are 10 or 18, both said they liked it and that they could feel the difference. I also know a couple of dads who have either purchased it or are in the process of considering it.

I haven’t seen any quick speed jumps just yet, but I know others have reported gains of 1 to 3 mph after just a few sessions. I think those gains will come as the pitchers get used to the timing, and get used to getting into their legs more.

So how much does all this wonderfulness cost? It’s not cheap. The Ground Force Sports website has it listed at $329, although if you type in the coupon code Coach James (a friend of mine who is the one who originally told me about it) you can save $25.

But look at it this way. How much do you spend on a bat that may last a season, or two if you’re lucky? The benefits from the QotH will last throughout a pitcher’s career – and may even help prolong that career by helping her continue to play in college.

One last story about it. A couple of weeks ago I brought it to a pitching clinic where I was working with a few 10U pitchers. I used it to help them get the feel of driving instead of stepping.

When I was done, one of the young male instructors from the facility approached me and said he’d been using the baseball version (King of the Hill) with his pitchers and that it had done a lot to reveal to them just how little they were using their legs.

We chatted about it for a few minutes. Then it occurred to me: Using the QotH kind of puts you in an exclusive, “in-the-know” club. So on top of everything else there’s that benefit if you’re interested.

Overall, I’m not much of a gadget guy. I see a lot of stuff out there that just makes me shake my head and ask “why?”

But if you want to help fastpitch softball pitchers learn to use their legs powerfully and efficiently, the Queen of the Hill is definitely worth the investment. Can’t wait ’til that first pitcher needs the other spring!