← Proposing A New Stat for Slappers
The importance of being coachable → 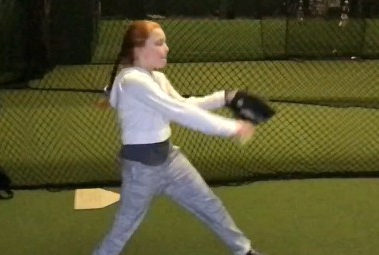 This came up recently when the mom of one of my students asked me for a little help in learning how to call pitches for her daughter. Makayla worked very hard through the off-season, pre-season, and then the season itself to learn to throw a good, reliable fastball, a strong change, and the beginnings of a drop ball.

The thing is, knowing how to throw those pitches isn’t enough. You also need to know when. Sarah wanted to use the pitches strategically but wasn’t sure how.

Now, you can search for fastpitch pitch calling guides on the Internet, but most of them assume a much older, more experienced pitcher with a variety of pitches at their disposal. Yes, it’s great to say “throw a curve followed by a rise” to this type of hitter. But what if you  don’t have either?

To help her out, I put together the guide below. You can either copy and print it out, from this post or you can download the attachment which contains the same information.

The guide essentially speaks to how to use “just” a fastball and a change to get ahead of hitters and keep them off-balance so they either strike out or make weak contact. It goes through what to throw different types of hitters as well as some core strategies.

This information has been vetted, too. I checked in with Sarah after Makayla’s last tournament and she said it worked great. So if you’re just getting into the whole cat-and-mouse game between pitchers and hitters, this guide should give you a good start.

This guide assumes the pitcher has a fastball and changeup, and can locate her fastball reasonably well. Keep in mind that you also have to pay attention to what the pitcher has that day. If she can’t throw to the outside corner this day, you won’t want to do that as often and so on.

Good hitter (1-5 in lineup most likely)

Slappers (if you see any)

Good times to throw a changeup

Hitter location at the plate

← Proposing A New Stat for Slappers
The importance of being coachable →