For A Proper Fastpitch Softball Warmup, Get Dynamic! 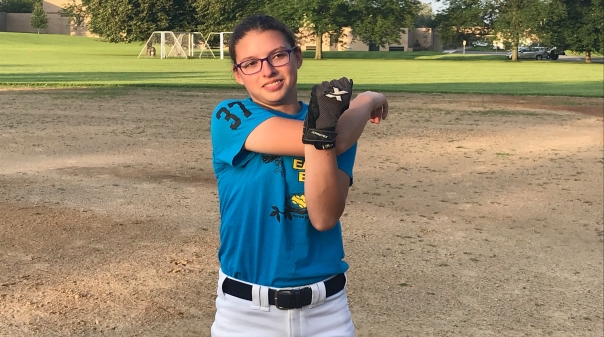 Just about everyone knows how important it is to warm up before undertaking any athletic activity, both to prepare for the best performance and to reduce the risk of injury. (I would say “everyone,” but I still hear horror stories of players being thrown into games or or having their pitch/overhand throw speed measured at camps without any warmups at all.)

What apparently isn’t as well-known is that the type of warmup you do can have a significant impact on both performance and injury prevention.

There are basically two types of warm-ups: static and dynamic. Static warmups involve standing still and pulling on muscles. One example is shown in the (staged) photo at the top of this post, where a player lays her arm across her chest, places her wrist just above the elbow of that arm, and either presses on the arm or tries to pull it a bit. (This, by the way, is one of the most useless “stretches” you can do because it really doesn’t stretch anything.)

Other examples include all the players sitting in a circle with their legs stretched out in front of them, attempting to grab their toes while they sit and chit chat about their day, rolling up on your back and trying to touch the ground behind your head with your toes, and the ever-popular point your elbow to the sky and try to pull it past your head with the other hand.

Dynamic warmups involve stretching the muscles by increasing the range of motion as you make different movements. A few examples are butt kicks, cherry pickers, torso rolls, and shoulder circles. You can see a few more examples in this video from Jason Domnanovich, a trainer for the Chicago Bandits (courtesy of the NFCA):

What’s the difference? Probably the most important is that static stretching actually turns off your nervous system, making it more difficult to perform at a high level. In other words, instead of preparing you for competition it hurts your preparation. This process of turning off the connection between the mind and muscles also makes you more prone to injury.

Dynamic warmups do the opposite. They activate the muscles so they’re ready to perform. Muscles that are activated can run faster, throw harder, more laterally more quickly, rotate more powerfully – all the things we want do on a softball field. Warming up dynamically also prepares the muscles for the stresses they will face during a game or practice session, helping reduce the chance of injury.

I know from personal experience the difference dynamic stretches can make. When I was still coaching teams, we moved from static to dynamic stretching before all activities and rarely experienced an injury. Not that we had a lot to begin with, but the number of injuries fell even further. That’s good, because healthy players will contribute a lot more to your success than injured ones.

Does that mean you should never perform static stretches? No, not at all. They’re fine after the game or practice to help the muscles relax after being taxed and prevent them from tightening up as they recover. In fact, it’s recommended. Just don’t do it before the game or practice.

So how do you go about making the transition to dynamic warmups? What exercises/activities should you do?

This video provides an excellent, softball-specific resource. It’s the one I used to learn more about it, and to build a dynamic warmup routine. (No, I have no financial stake in you buying the video, I just know it’s good.)

There are plenty of others as well. Just search on “dynamic stretching softball” and you’ll find a wealth of resources that will help you build a warmup that will actually help your team gain a little extra edge while preventing injuries.

If you (or your team) is still standing motionless, tugging on muscles before the game, stop it! Make the transition to dynamic warmups. You’ll be glad you did.

Oh, and if you have any stories to share about dynamic versus static warmups, be sure to add them in the comments below. While you’re at it, be sure to hit the Like and Share buttons, and take some time to subscribe to Life in the Fastpitch Lane so you never miss a post again.