Over the past couple of days I’ve been emailing back and forth with my friend Stan Goplen, who has been working with his granddaughter JJ to get her ready to make a statement pitching for her high school team this spring. Stan told me that JJ hurt her finger playing volleyball and may not be able to throw for a little. 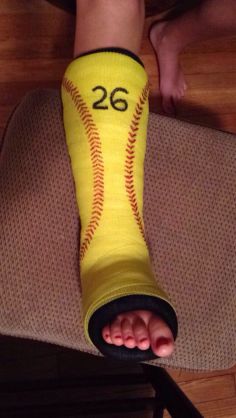 Some people would see that as a problem. But I often find that injuries create opportunities. How?

No matter how good it might be for them, sometimes it is tough to get kids to spend the amount of time required to work on one part of the pitching, hitting, throwing or other motion/skill. They get bored easily (especially these days) and want to move on to the complete skill.

An injury takes care of that issue. For example, a pitcher with a hand issue can either sit out, or can work exclusively on her leg drive (which is what Stan planned to do with JJ).

Conversely, a pitcher with a leg issue can work on her arm circle, spins, whip and so forth. I had that happen earlier this year with a 10U pitcher named Jenna. She’d hurt her ankle, so while it was recovering we worked from the waist up, which helped her immensely. By the time she could use her legs fully again she was much better prepared to take advantage of them.

The most extreme case I had was a few years ago when a pitcher named Devin was in a cast from her ankle to her hip. We found a high stool and she sat on that as she worked on her spins and arm path for her curve and drop balls. By the time she was healthy both pitches were considerably better than they had been – because we were able to lock in the arm mechanics she required.

The same concept can be applied to other aspects. Hitters with injured legs can get into a turned position and work on taking the barrel of the bat to the ball (instead of dropping the hands and sweeping the bat through the zone). Fielders with a broken wrist can work on lowering their hips to a ground ball (without catching, of course) or learning to track fly balls over their heads. All it takes is a little creativity and imagination.

So the next time you see a player with an injury, don’t think “oh darn.” See it as an opportunity. You’ll be amazed what you can accomplish.

So how about you? What have you done to take advantage of player injuries? How did it work out for you ?