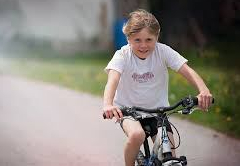 People often use the phrase “it’s like riding a bike” To refer to how easy it is to pick up a skill again when you’ve been away from it for a while. When it comes to softball training, however, there’s another use.

Players will often get impatient with themselves when they don’t pick up a skill right away. Pitchers will be wild when trying a new pitch). Hitters will swing and miss while working on improving their swings, or hit a popup or soft dribbler. Catchers will go for a block only to have the ball go between their legs. Lots of different things can happen.

When they do, I will often ask if they can ride a bike. I have yet to run into one who can’t. I’ll ask them if they have to think about how to ride a bike. They always respond no.

Then I ask them if it was always that way. What happened when they first took off the training wheels? Usually mom or dad held onto the seat and ran behind them until they were ready to take a few tentative pedals on their own.

Eventually, though, they figured it out. And once they did, they probably never gave it much thought again.

The same goes for softball skills. At first they can be difficult, and require a lot of thought (as well as a lot of trial and error). The success rate may be fairly low. But the more they do it, and really go after it, the less they will have to think (or worry) about it.

It’s a thought that seems to resonate. They know there were scraped knees and elbows at first on the bike, but today the only remarkable thing would be if they fell off.

When players get frustrated, remind them of their experience riding a bike. It might help them get back on track.

How do you help players learn patience while they’re learning a new skill? Any tips or tricks you’ve found helps them understand?