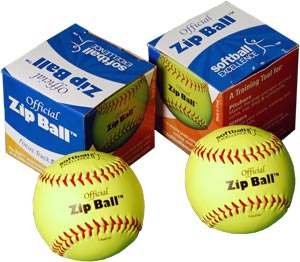 Recently I had the opportunity to see Cindy Bristow demonstrate the use of Zip Balls, a training aid she developed to help fastpitch softball players learn to pitch, hit and field better. It was at the NFCA Coaches College course on team practices; she was working with some D1 pitchers, and used the Zip Balls as part of the training.

I had seen Zip Balls advertised for a while, but wasn’t really sure if they would be worth it. I’m not big on gimmicks and gadgets, so I always tend to look at such things a bit skeptically. But I can tell you now from first-hand experience that they are definitely worth the investment.

If you’re not familiar with them, Zip Balls are little softballs. They are slightly larger than golf balls, with full seams and all, but they weigh as much as regular balls. It’s a little disconcerting the first time you pick them up.

The object of using them is to feel how the fingers are used on the ball. Because they’re so small you’re forced to use the finger pads to throw them.

I’ve used them with several different pitchers and have found them to be great for teaching all sorts of things. For example, with a beginner who was having trouble getting the feel of the basic motion, Zip Balls helped her learn to use her arm properly. With the small ball she was able to relax and lead her elbow then pull her hand through the release zone.

Where they really seemed to be effective, though, was with more experienced pitchers learning movement pitches. For some it was a matter of feeling how to position the hand properly. When Cindy demonstrated them she said to tell the pitcher to be very aware of what her hand is doing. It usually takes a few times before they can actually do it, but they do start feeling it.

With one of my most accomplished pitchers we were able to really sharpen her movement pitches, especially her curveball. She already had good break on her curve, but after using the Zip Ball it broke quicker, sharper and more dynamically.

If you purchase a dozen you also get a DVD that shows you more uses for Zip Balls. Most are pretty intuitive – you can use them for hitting, fielding, training catchers, etc. — but it’s worth a look anyway.

Zip Balls are definitely a good investment, especially for pitchers. Just one word of caution — they can get through the netting on typical batting cages very easily. If you’re using them indoors, be sure there’s a tarp so something behind the catcher or someone outside may get hurt!

Posted on December 19, 2012, in Pitching, Product Reviews. Bookmark the permalink. Leave a comment.