How NOT to act when you’re the pitcher

I was out watching a high school softball game today (as I often like to do) on a beautiful Saturday afternoon. It was a well-played game overall, with a few good hits and some excellent defensive gems as well. 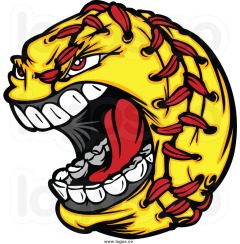 There was one thing I saw, however, that kind of bothered me. First let me set the scene.

The home team was in the field, and was trailing by a few runs. The visitors had a couple of runners on base. Bases may have even been loaded – I usually don’t pay that much attention to the specifics.

The pitcher threw a pitch and the hitter turned on it, driving a sharp two-hopper between the shortstop and third baseman and into left field. The left fielder came charging up to field the ball gloveside. That’s when disaster struck.

The ball took a nasty hop right over her glove and to the fence. Two runs scored, extending the visitors’ lead, and there were still runners on. That’s when I heard it.

The pitcher lost her cool and yelled “Outfielders, you have to get in front of the ball.”

She was correct, especially in that particular situation. The left fielder was going to have no play by charging the ball hard, so should’ve made sure it stayed in front of her. But…

It’s not the pitcher’s place to chastise her fielders. She needs their support. Pitchers should either say something positive and encouraging to their fielders or keep their mouths shut, in my opinion. Chastising the fielders is the coach’s or the catcher’s job. Giving the fielders a hard time will do the pitcher no good, but it could do some harm.

Personally, if I were that left fielder and got called out like that, I would not have been happy. When the pitcher rolled the first pitch to the next batter into the plate (as she did) I might’ve been tempted to yell “Pitchers, you can’t roll the ball in to the plate.” See how she likes it.

Pitchers have to understand that just as they don’t usually walk batters or hit them on purpose, fielders aren’t trying to make errors. They just happen. Also keep in mind that runners on base don’t just materialize from nowhere. If there weren’t other errors already, they got on by a hit, walk or HBP, so the pitcher has some culpability for those baserunners that scored.

Again, unless they can strike out every opposing batter every time, pitchers need everyone pulling in the same direction behind them. Getting mouthy to their fielders isn’t the way to accomplish that.

They’ll be better served by staying cool and demonstrating leadership. It’s the better choice not only for the immediate game but for the season.