Pitching: hitting your spots not the be-all and end-all 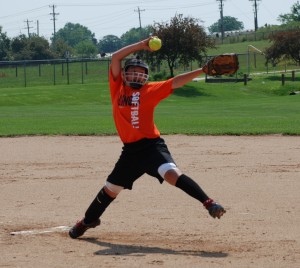 Back to focusing on softball with something that’s been on my mind for a little while. It never ceases to amaze me how obsessed coaches often are with whether their pitchers hit their spots. Especially at the younger ages.

It’s almost like that’s the only thing they know about pitching. Anytime a pitcher gives up a hit (or even comes close to it) some coach is likely to yell “you need to hit your spots.”

There are a couple of flaws in that thinking. The first is that the value of hitting a particular spot when it’s called is directly proportional to how good the person calling the pitches is at setting up hitters.

I’ve known of coaches who basically call low and outside fastballs 90% of the time. I’ve heard about coaches that call screwball after screwball because, well, they saw screwballs work on TV. I’ve seen coaches refuse to call the changeup because they prefer that their pitchers throw heat.

The problem with that is predictability. If you’re throwing to the same location all the time it probably won’t take long for hitters to figure it out and adjust. Speed kills, but as we saw in the last WCWS, even a 70 mph pitch isn’t enough alone to overcome good hitters. So sure as shootin’ a 45 or 55 mph pitch won’t be. You need a mix of speeds and locations.

There’s also an art to setting up a hitter. It takes time and effort to learn how to do it. For example, when a hitter fouls a ball straight back, a good follow-up pitch is a changeup. Of course, if you do it every time you become predictable.

When you get ahead in the count 0-2, you don’t want to throw a strike – you want to throw a ball that looks like a strike. Maybe a curve, maybe a high fastball or rise. But again, you need to mix it up to keep hitters from settling in.

An inexperienced coach often doesn’t know that. So they’ll call that favorite pitch even when it isn’t appropriate. The pitcher would actually be doing the coach a favor by missing the spot, truthfully. I’ve seen more than one coach saved by a pitcher who didn’t throw what was called.

The other reason hitting spots is often overrated is that it isn’t the best measure of a pitcher. Coaches like it because it can be quantified. They also like it because they can use it as justification for elevating one pitcher over another – i.e., pitcher A hits her spots and pitcher B doesn’t, so A must be better than B.

But the truth is the single best measure of a pitcher is whether she can get hitters out. She may not put the ball exactly where the coach called it, but if she’s getting hitters out what difference does it make? Hitting spots alone doesn’t get hitters out. You get no credit for that from the umpire, just as having a perfect swing doesn’t entitle you to get on base. I’ll take a sloppy pitcher who can get hitters out over a precise one who can’t any day of the week.

That’s not to say pitchers shouldn’t work on hitting their spots – they should. If for not other reason than they may play for a coach who actually does know how to call a game – or better yet how to teach a catcher to call one. If they can put the ball right where they want it they can really take command.

But coaches, don’t let it become your determining factor. See the whole picture and give some space to the pitchers who can get people out.