Saw an excellent article the other day in Jeff Janssen’s Championship Coach’s Network newsletter and thought I’d pass it along. You can read it here.

The article is actually a book review written by Greg A. Shelley and Colleen Sager about the book The Encore Effect by Mark Sanborn. The book covers how to create remarkable performances. 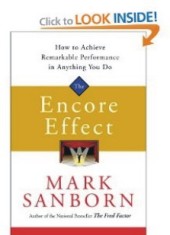 In the review, they highlight three areas Sanborn says are essential to becoming the type of performer who really stands out. Those elements are Commitment, Professionalism and Skills. Commitment and skills are pretty much self-explanatory. But professionalism takes a little explanation.

According to Sanborn, it’s being “other-minded,” i.e. putting the team and your teammates ahead of yourself. This is an area many young athletes struggle with. They are far more focused on their own personal performance than the performance of the team. Yet that mentality often holds them back from being, as the Army says, all they can be. Until they can move beyond themselves they may perform well. But they won’t be considered extraordinary, or a premier player.

This is a topic I’ve written about before as well. No matter how well you play, you’re not really an elite player until you can raise the level of play around you.

I love that concept. So many players are content to be good, or even very good, that they never make the effort to become great – or remarkable. That’s a shame, because it means they’ve wasted their potential. It’s like another favorite quote says — “Good is the enemy of great.”

I haven’t read the book yet, but it is going on my future reading list. If you want to find out what it takes to be remarkable, I suggest you pick it up too.