A little trick for the backhand change 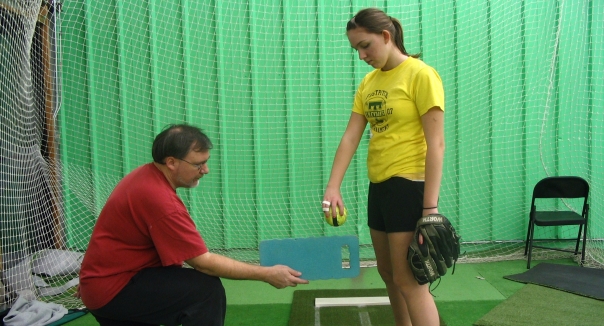 Previously I’ve talked about the importance of keeping a bit of a bend in the arm when you’re throwing the backhand change. That helps get rid of the dreaded “hump” in the pitch, where it starts to go out, then goes up a little — right into the hitter’s wheelhouse. Raising the arm slightly allows the pitcher to throw it out flat, which will keep it down.

Sometimes, however, pitchers think they’re bending the arm to pull the ball up but they’re actually not. Here’s a way to help them get the feel of it.

Take a lightweight object and hold it at the pitcher’s release point. I usually use a garden kneeling pad since it’s flexible. Hold it at the bottom of the normal circle. Then have the pitcher throw the change. If she’s dipping down instead of raise her arm, the ball will hit the object as she throws it. This will give her the feedback she needs to know where her hand should go.

Normally I tell the pitcher I’m going to hold it in the regular path of the ball. In truth, I actually hold it lower than that. They really have to work to hit it. But the idea of having it down there is usually enough to make them concerned and to bring the ball a little higher. Once it’s there, the arm is in a weak position — which means the pitcher can throw the ball as hard as she can without risking it being fast.

It’s a great trick, and works every time.

Posted on February 7, 2009, in Pitching. Bookmark the permalink. Leave a comment.