Not too long ago I saw an article in Bobby Simpson’s Higher Groundnewsletter recommending a book called Small Unit Leadership, written by Col. Dandridge (Mike) Malone, U.S. Army (ret.). Although it’s really written to help sergeants, lieutenants and captains learn how to lead military units, there are a lot of great lessons in there for coaches too.

One of them is understanding the makeup of players on a team. Col. Malone breaks them into four grorups based on two criteria — the willingness of players to learn skills, and the ability of players to execute those skills. Essentially the groups are:

Obviously the group you want to have the most players in is the willing and able. They are enthusiastic about learning and getting better, and they have the skills you need to excel. Your job as coach for them is to encourage them to keep growing, and enjoy the ride. They are also your potential team leaders.

The second most desireable group in my mind are the willing and unable. They want to learn, they just haven’t acquired the skillset yet. Your job as coach is pretty obvious — teach them how as quickly as they can handle it. The difference between this group and the first group is probably experience. Even the willing and able need training to improve their games. But they already have a basic skillset, where this group is more raw. In softball it also tends to be younger.

The third group is the unwilling but able. Now we start getting into the negatives. This group of players has the skills and talent to play, but they are unmotivated to work hard or raise their game to a higher level. They may also be in it more for themselves than for the team. Your job as coach is to try to move them into the willing and able category. That’s a tough row to hoe, but it can be done. Doubtless it’s going to take more of your time than you’d like, and there’s no guaranteed outcome. But if you can do it you’ll have valuable players you can count on.

The final group is the unwilling and unable. Or as I like to put it, the “what are you doing here?” group. Maybe their parents signed them up for softball as a babysitting service while they work out at the health club or watch Oprah. Maybe they thought their daughters needed some exercise or a team experience whereas the daughters would rather go to the mall. Maybe they’re just kids with negative attitudes. Whatever the case, this group is going to take the greatest part of your time, and provide the least return on investment. Look how much time they’re taking in this post. Try to save them if you can, but realize it may be a futile effort, and that you may just have to cut your losses. Even Col. Malone tells military officers that the best strategy with this group is get them out of there as quickly as possible. This group can be a cancer on the team. Not only won’t they contribute much, but they’re likely to take other players down with them. Group 3 is vulnerable, but so is Group 2, and you’d really hate to lose them. Group 4 can ruin a season faster than bad weather, so recognize the risk and deal with it accordingly.

Now that you understand the groups a little, here’s an exercise you can do. Take the chart below and write the last name of each person on your team where you think they fit along the two parameters of willingness and ability. Hopefully you wind up with lots of players in the upper right, and none in the lower left. If not, you’ll at least know what you’re working with and can adjust your plans accordingly.

Good luck. And if you do pursue this activity, let me know what you found out. Post a comment. I think we’ll all find it interesting and helpful. 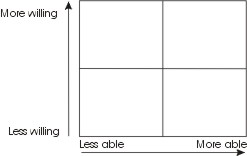 Posted on March 15, 2008, in Coaching. Bookmark the permalink. Leave a comment.