← Knuckles to nose
You can never hear this enough →

There is a fairly standard analogy in the business world called the “three-legged stool.” The basis of it is there are three elements that are important to whatever it is you’re trying to accomplish, and all three must be both present and in balance. If you put too much or too little emphasis on any one area, or even two areas, the stool will not be stable and will not be able to fulfill its purpose.

In softball the three legs of the stool are physical skills, the mental game, and conditioning. You need all three to be successful. 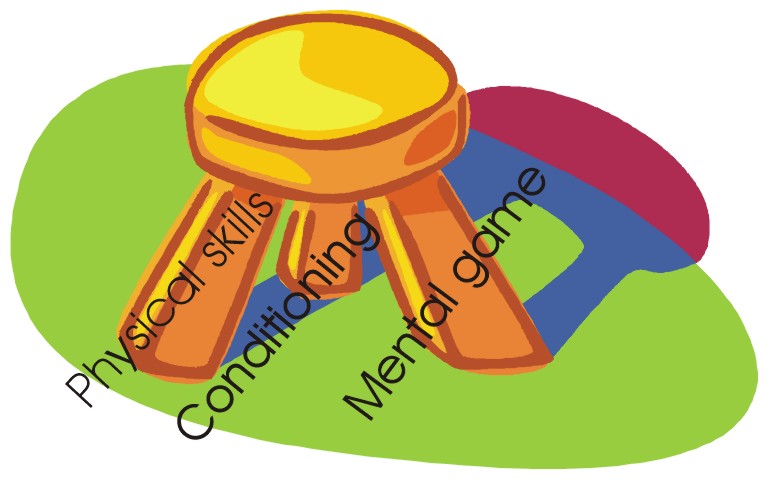 Unfortunately, that’s not always the path that coaches follow. Many will over-emphasize one aspect to the detriment of the others.

Some will spend all their time working on physical skills. They will hit, field ground balls, chase fly balls, pitch, etc. until the cows come home. They may run a few random sprints at the end of the practice, but that’s about all they do. They won’t spend much time at all on the mental game — visualizing success, building confidence, controlling emotions. They may have success against lesser teams but they have a hard time winning the big games. Instead, they blame the field conditions, the umpires, the luck of the draw, or random events for their losses.

You rarely hear about coaches over-emphasizing the mental game. In fact, when you hear a mental game expert such as Jeff Janssen speak, you’ll hear that most coaches believe that confidence and a positive mental attitude are highly important to winning, yet they will spend very little time on it. That makes one of those legs very short.

If I were taking over a new team, and had limited time to get them ready, the first thing I would want to assess is their physical skills. Do they know how to throw, hit, field a ground ball, etc. If not, that’s where I would start. That’s kind of the survival level. I would also use that skill building time to start boosting confidence and an a believe that if we all do our jobs and work together we can have a successful season.

Once the skills were starting to come along, I’d start working with them on understanding the game better — what happens in various situations, how you make decisions, when to throw the ball and when to eat it, etc. We’d be moving from basic individual skills to using those skills in a team setting. That’s where I’d start introducing softball-specific conditioning. There are plenty of drills you can run, including those that combine two or more skills, that will help drive conditioning without sacrificing other aspects of the game. For example, you could have a player hit off a tee and run to first. A coach standing at first would say whether to run through the base or round it. If the player rounds it, the coach would say whether to continue or come back. If the player continues she goes hard and slides into second. Do that enough times and you’re building endurance, agility, and quick decision-making along with the physical skills of running through or rounding the base.

Should we get to the point where everyone on the team has built the skills and understands the game we could spend more team time on conditioning. At that point it could be the difference. Still, I’d probably expect more of that to be done away from the field than on it. Of course, at that point it would likely be a given that those athletes would understand the importance of training and would come to practice already in excellent physical condition.

Where coaches get themselves in trouble is when they do things out of order. They’ll focus on “brutal conditioning” first and foremost, then lament that they can’t hit. Of course they can’t — they haven’t emphasized it. What they miss is that softball is not a game like soccer or basketball where you can wear out the other team by running on them. There’s a lot of standing around in softball, and most plays are over in three to ten seconds. As my friend and fellow coach Rich says, on a home run you don’t get to keep running around the bases until the other team finds the ball.

Another thing they’ll do is push the skill level training beyond what the athletes can do, with no regard as to whether they are losing confidence in the process. Or they’ll believe they can berate players into executing the skills better. When was the last time you did something better because a boss yelled at you unmercifully while you tried to do it? It just doesn’t happen. Coaches ignore the mental state of their players at their own peril. Especially with girls. They have to feel good to play good. If you make them feel bad, don’t be surprised by the results.

Finally, coaches will separate conditioning from the other two legs — or use it solely as a punishment for infractions real and imagined. The right conditioning program can actually help build confidence and encourage competition. My preferrence is to include elements of speed and agility in skills drills, and then set up a competition at the end that has an element of fun. Last year our girls loved to see the agility ladders come out because they knew we were gong to have some sort of race or skills competition, and it would help end practice on a high. Sometimes those races involved running home-to-home while performing various drills. Separated from a context they would’ve brought groans. But because it was presented as an activity rather than a punishment the players pushed themselves to the limit to “win.” And that’s what conditioning is all about.

Again, it’s important to remember that the stool has three legs. The more uneven the stool becomes the harder it is to use it. Make any one leg too long and the stool falls over. Then it’s no good to anyone.

Posted on February 24, 2008, in Coaching, Mental game. Bookmark the permalink. Leave a comment.

← Knuckles to nose
You can never hear this enough →